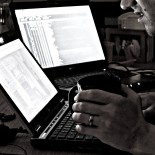 Something Can Be Done About It

I know that I just made an earlier post, but just finished another lecture in the Thought, Emotion & Effort lecture series of the Scientology Basics, and wanted to just say a thing or two before I forget.

In marauding around the Internet, I’ve gotten into a ton of discussions where someone wants to get into some manner of argument over this or that on the subject of Scientology.  What we usually (actually always) lack in such discussions is a common basis of argument, which is the basic tenets and axioms of Dianetics & Scientology.

Anybody who’s read Plato’s Republic would be able to tell you how artfully one can argue or how crafty you can get in trying to get at the bottom of such a discussion.

What I’ve always wanted in such arguments is to be able to have a common ground with people who are willing to sit and think and discuss scientifically the subject of Dianetics and to actually then see if there is factually agreement or disagreement on its basic tenets and practice.

I think I’ve found it.

The two elements that speak loudest to me in this are first the book Dianetics: Evolution of a Science, which is where L. Ron Hubbard outlines how he factually came about the discoveries in Dianetics.  It’s fascinating, actually, to anyone who enjoys thinking methodically and logically and not based on who’s got the funniest YouTube video or whatever.

But the next and most fascinating element is this lecture I just finished listening to, entitled The Logics.   LRH describes how you go about thinking about solutions to the problems of man, and how you go about solving them, and the basic steps in logic that you’ve got to take in such.  He is really urging people to take what he’s telling them and just to hell with accepting it at face value — actually go and try to think with it and compare it to the real world and see if it works!

On a piece of paper, or read in the book Advanced Procedure & Axioms, I didn’t get how important The Logics were in one being able to really think with and understand how the rest of Scientology fits together.  But that in itself is one of the main points that he’s trying to get across in this lecture.

Unless you can see a number of individual data about something, be able to compare it to other data and to the real world, it’s all useless.

Anyhow, I can’t really hope to impart how cool this lecture was, in terms of a logical, scientific understanding of Scientology, so all I can suggest is to just listen to it yourself.  But do read the books before it, as then I think it will be only that much more interesting and profound.

My name is Tad Reeves, and I am a certified AEM Dev/Ops Engineer, cycling enthusiast, train & transit junkie, and father of three. I’m currently an Adobe Experience Manager Architect, consulting for ICF Next, as well as for other companies.
View all posts by turbotad →